Souters is committed to providing a high-quality service to all its learners. The Learner Complaints Policy sets out how a complaint can be made about Souters’ service.

The framework for the learning experience of learners is set in Souters Learner Charter, which states what learners can expect from the Centre (and what the Centre expects from them). Learner complaints should be based on the undertakings of the Charter or the Centre’s associated policy statements on equality and harassment and bullying. The Charter is provided to all learners in the Learner Handbook. It is also available from the Centre’s Office.

Learners are expected to use the procedure in a positive spirit, as will the Centre. Souters reserves the right not to proceed with a complaint where the complaint does not directly concern the learner as the person making the complaint or where initial investigation shows that there is insufficient evidence to justify further action.

The majority of complaints will be resolved as part of normal, informal communication.

Staff members are available to help with these procedures if required. Contact details can be found on our website and in the Student Handbook.

The Learner Complaints Policy is for the use of learners on official Centre courses and activities.

Complaints will be handled sensitively and with full confidentiality for both learners and staff. Anyone named in a complaint will be informed of the nature of the complaint and will be offered the opportunity to respond to it. Information contained within the complaint will only be available to those involved in the investigation.

Save for exceptional circumstances, a complaint should be made two calendar months of the incident which is the cause for the complaint.

No learner will be disadvantaged by bringing any complaint, whether successfully or otherwise. The exceptions to this are complaints that are found to be malicious or vexatious.

There are separate procedures that exist for the following:

A complaint is defined as an oral or written expression of dissatisfaction with an aspect of the Centre service.

Types of Complaint and How They Are Handled

Individual Complaints made by individual learners are dealt with according to the guidance set out in this document.

Where a complaint is brought by a group of learners, a spokesperson must be nominated for the purpose of a correspondent of the Formal Procedure. Consent must be given by all members of the group to the staff member investigating for this spokesperson to discuss their case.

Each member of the group must demonstrate a direct relationship with the matter for complaint.

It would be impossible to undertake an investigation of a complaint that has been made anonymously, as complaints require investigation to enable resolution. Therefore, for practical reasons, no action will normally be taken in these circumstances. However, anonymous complaints will be investigated under exceptional circumstances where it is deemed appropriate and at the discretion of the Centre.

The consent of the learner must be first obtained prior to any investigations taking place. This must be in writing and signed by the learner even if the complaint was made by a carer or relative of the learner concerned.

A complaint that is received by the Governing Body will be acknowledged and referred to the Quality Manager who will ensure that it enters the procedure at the appropriate point.

Learners pursuing a complaint through the Learner Complaints Policy have the right to apply for direct access to personal data in accordance with the policies and procedures of the Centre under the provisions of the Data Protection Act 1998 and other legislation. Applications should be made in writing to the Course Director. There will not normally be a charge for providing this information.

Informal complaints should be made to the member of the Centre’s staff who is directly responsible for the problem. This may be the tutor or the Course Leader. All complaints must be dealt with promptly by the person to whom the complaint has been made and, if the complaint is justified, things must be put right as soon as is reasonably practicable.

We hope to resolve most complaints informally.

If a complaint concerns discriminatory behaviour, harassment, or matters of a sensitive nature that cannot be raised with the member of the Centre’s staff concerned, the matter should be treated as a formal complaint.

If a learner is not satisfied with the steps taken to resolve the problem informally, or if it involves discriminatory behaviour, harassment or matters of a sensitive nature, or if the complaint is felt to be too grave to be dealt with informally, a formal complaint should be made.

A formal complaint must be made in writing, preferably by the learner themselves, but if not, with the assistance of a member of Centre staff. These can be made by email, letter or by completing a Complaints Form which can be obtained from the Office.

The complaint should explain the problem that has arisen and set out what outcome the learner would like from the Centre.

The complaint should be sent to the Quality Manager.

All findings must be reported back to the Quality Manager, who will assist in drawing up a response and will check that the reply is fair and consistent with Centre policy. The Course Director will be copied into the reply as appropriate.

If the complaint is upheld, a formal apology will be made within the reply and the actions the Centre intends to take to prevent future recurrences will be detailed within this response.

In order for an appeal to be considered, a learner must either:

In the event of the complaint being against the Course Director, all the procedures outlined shall apply. The Course Director’s role shall be taken by the Board of Directors or his nominated deputy.

The Complaint Hearing will normally take place within 20 working days (excluding Centre holidays) of receipt of the appeal.

The Chair of the Hearing Panel will report the findings of the panel to the other members of the Board of Directors, who will collectively decide upon a resolution of the complaint. The resolution will be communicated in writing to the learner concerned within 20 working days of the hearing (excluding Centre holidays). The letter will set out the reasons for the resolution. If the complaint is upheld, the letter will contain a formal apology and indicate how the Centre intends to prevent a recurrence.

A report will be prepared by the Quality Manager for the Senior Management Team, to assist in monitoring the effectiveness of the Learner Complaints Policy and to identify relevant quality issues.

The Board of Directors resolution will be final. There are no further rights of appeal under this Policy within the Centre Procedures. If still dissatisfied the learner may appeal to the Skills Funding Agency (SFA). The SFA will check that the Centre’s procedures have been fully used before taking an appeal forward.

Souters will monitor and track complaints made in order to improve the quality of its service. The Quality Manager will ensure that records show the nature of the complaint, how it was dealt with, the time taken for a resolution to be reached and the outcome.

The Learner Complaints Policy is one aspect of the Centre’s quality assurance system and complaints are considered an important source of feedback on the quality of the Centre’s service. Where appropriate, complaints will be used to improve services and facilities. Termly complaints reports will be made to the Quality and Board of Directors panel. 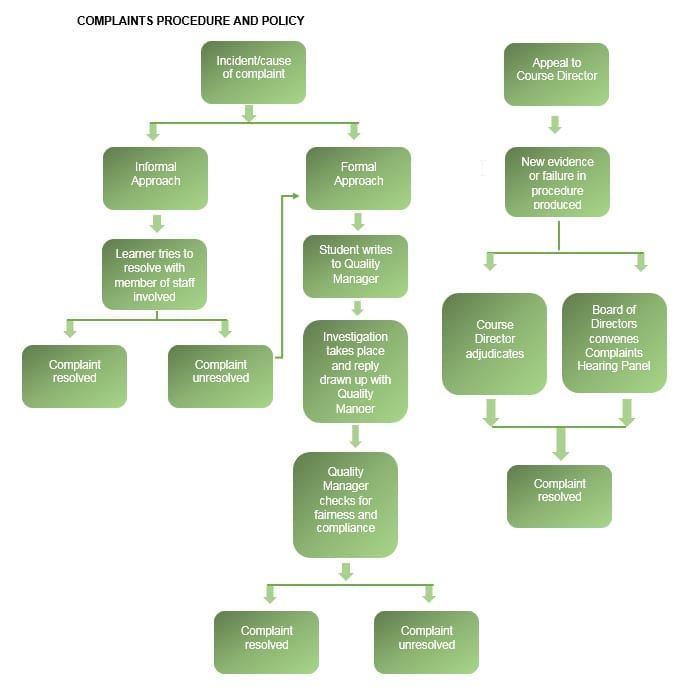 Introduction Making a complaint may be a stressful experience for learners and so if a learner makes a complaint in good faith, which is not confirmed by subsequent investigation, no action will be taken against them. However, if the investigation of the complaint reveals the allegation to be vexatious, malicious, frivolous or unsubstantiated (see Appendix 3: Definitions) Souters reserves the right to dismiss the complaint and take disciplinary action against the learner.

Vexatious Complaints can result in significant resource issues for Centre staff when handling complaints of this nature and we also have a duty to ensure the safety and welfare of our staff. This Policy sets out the Centre’s approach to the relatively few complainants whose actions or behaviour it considers to be unacceptable or unreasonable.

The meaning of Vexatious Complaint

It is considered that unreasonably persistent or vexatious complainant as those complainants who, because of the frequency or nature of their contracts with the College, hinder our investigation of their or other people’s complaints. Vexatious complainants may be characterised as trying to make life difficult for the Centre rather than genuinely seeking to resolve a grievance.

Examples of unreasonably persistent and/or vexatious complainants can be seen below:

Where a complainant behaves unacceptably during a telephone conversation, Souters reserves the right to terminate the call.

If the unacceptable behaviour persists despite previous warnings, the Quality Manager or Course Director may decide to take appropriate action to restrict their contact with the Centre in connection with the complaint. Any restrictions imposed will be appropriate and proportionate. The Centre will take account of any reasonable adjustments as a consequence of any declared disability. The options which will be considered are:

When the decision has been taken to apply this policy to a complainant, the Quality Manager or Course Director will contact the complainant in writing (and/or as appropriate) to explain why their behaviour is believed to be unacceptable, what action will be taken and the duration of that action (typically three months) along with a copy of this policy.

Where a complainant continues to behave in a way that is unacceptable, the Quality Co-ordinator or Course Director may decide to refuse all contact with the complainant and stop any further investigation into his or her complaint.

New complaints from learners who have come under this policy will be treated on their merits. Restrictions will be reconsidered to see whether they are still appropriate or necessary in relation to the new complaint.

The status of a complainant judged to be unreasonably persistent or vexatious will be reviewed every three months. The complainant will be informed of the result of this review if the decision to apply this policy to them has been changed or extended

A complaint is defined as an oral or written expression of dissatisfaction with an aspect of Souters’ service.

This is where a complaint may or may not be the latest in a series of requests and it:

A complaint may be considered to be frivolous where

A complaint may be considered to be malicious where:

A complaint may be considered to be unsubstantiated where:

Souters was established in 1988 as a specialist training provider. Souters have continuously provided courses whichare ideal to Executive Assistants, PAs, Executive Secretaries and Office Managers. Souters has trained professionals from a wide range of companies in the United Kingdom, the Netherlands, Germany and many other countries across Europe, the Middle East and Africa.